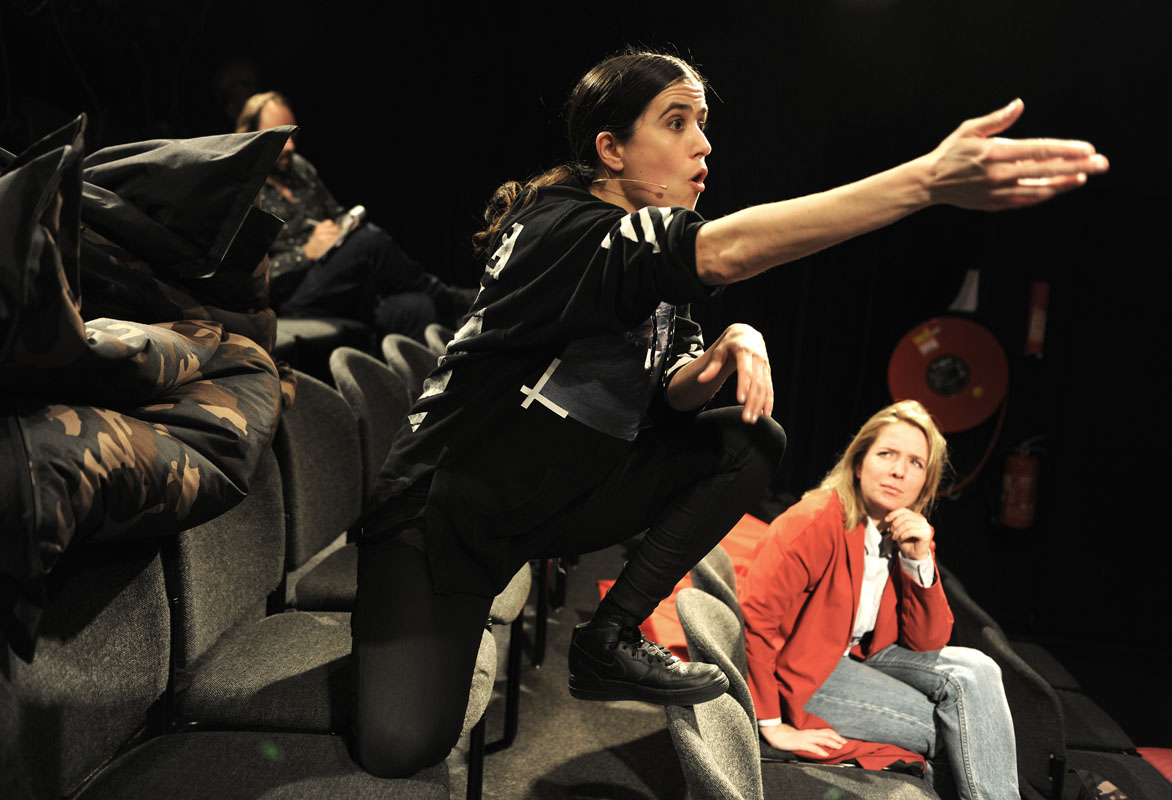 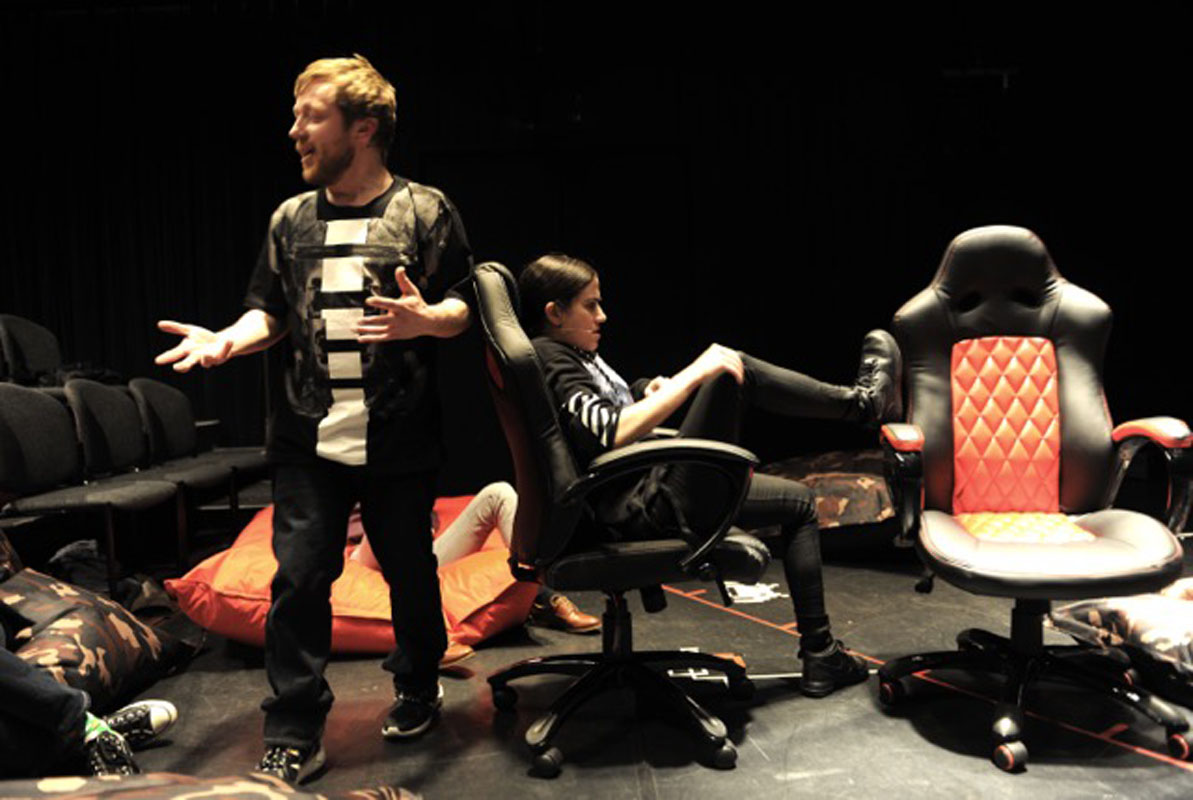 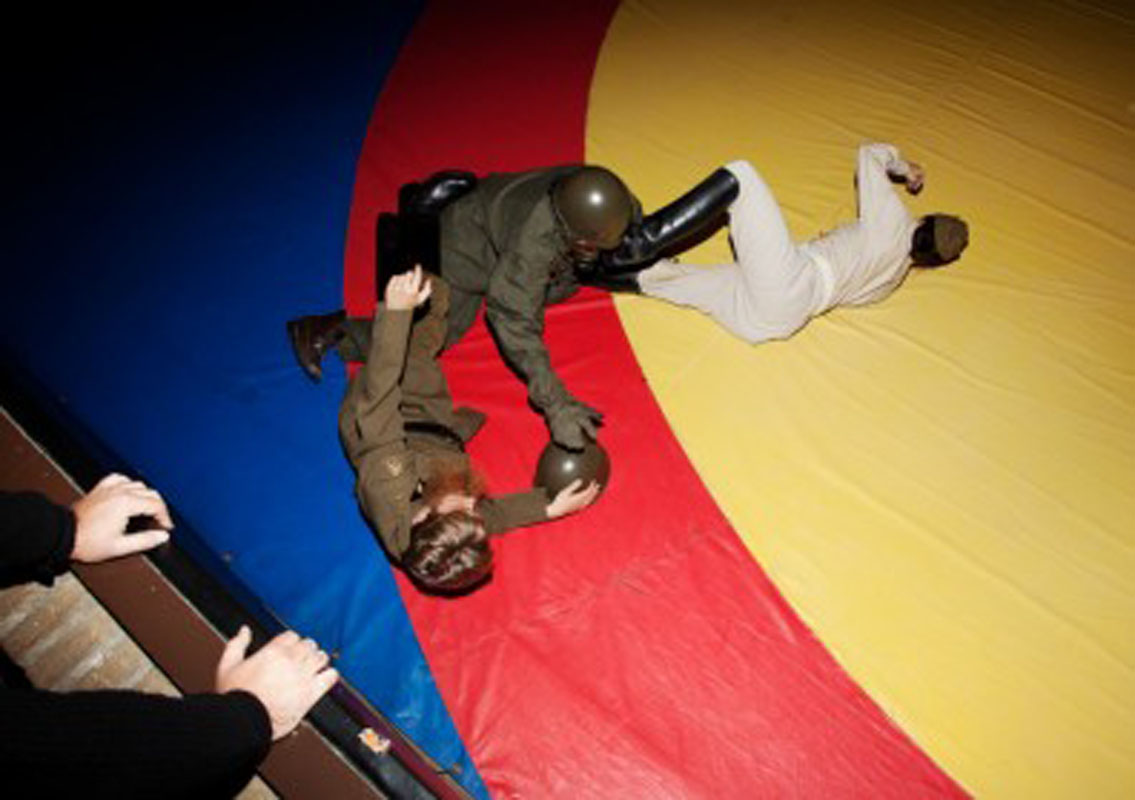 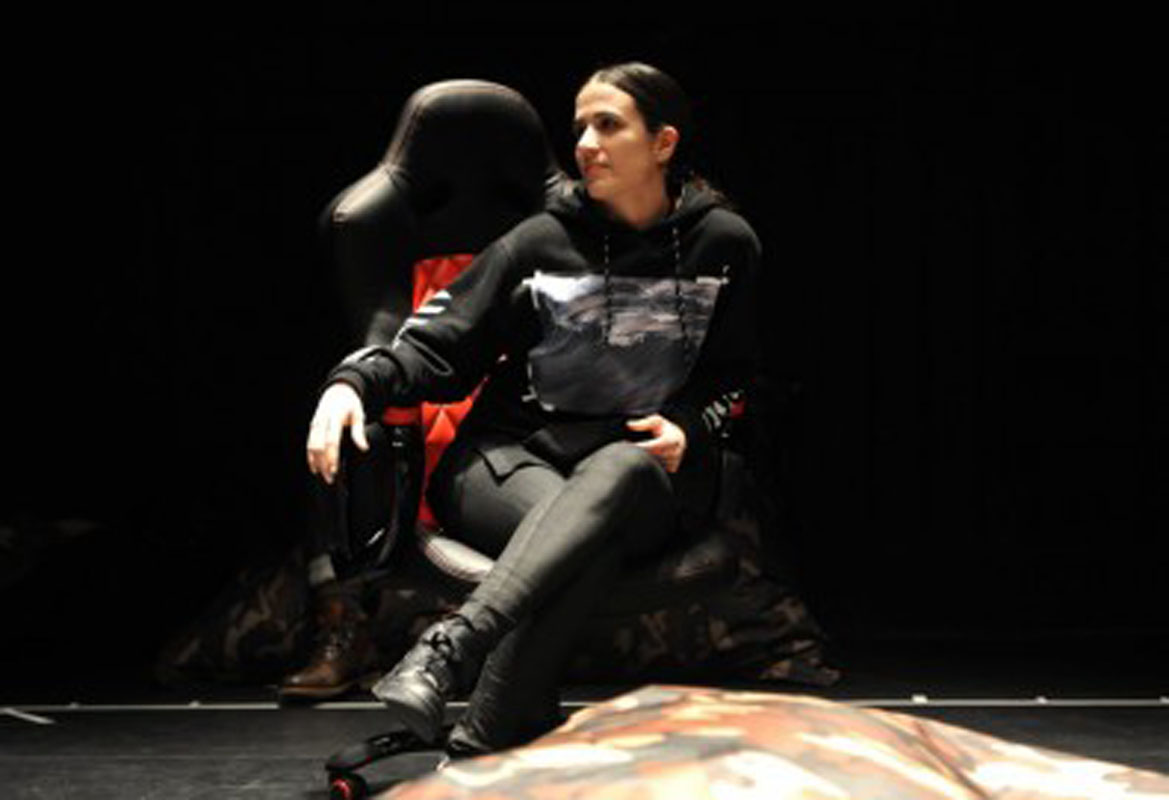 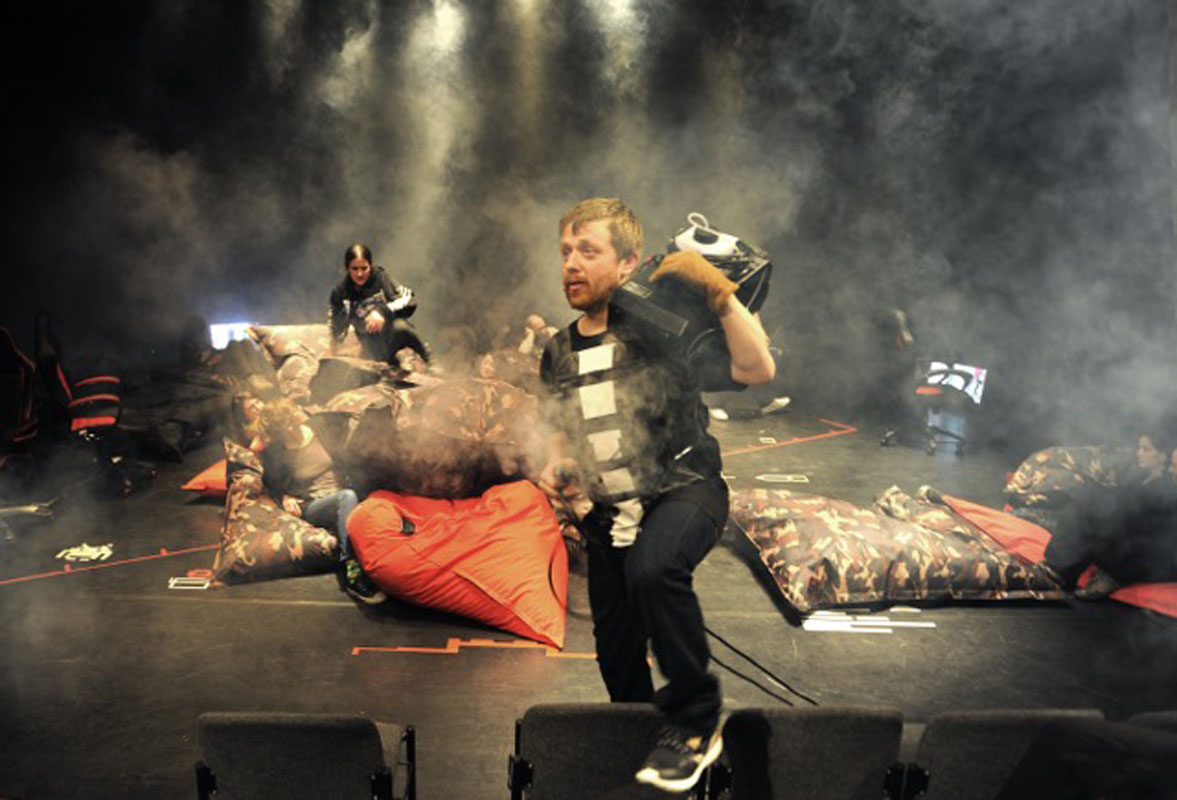 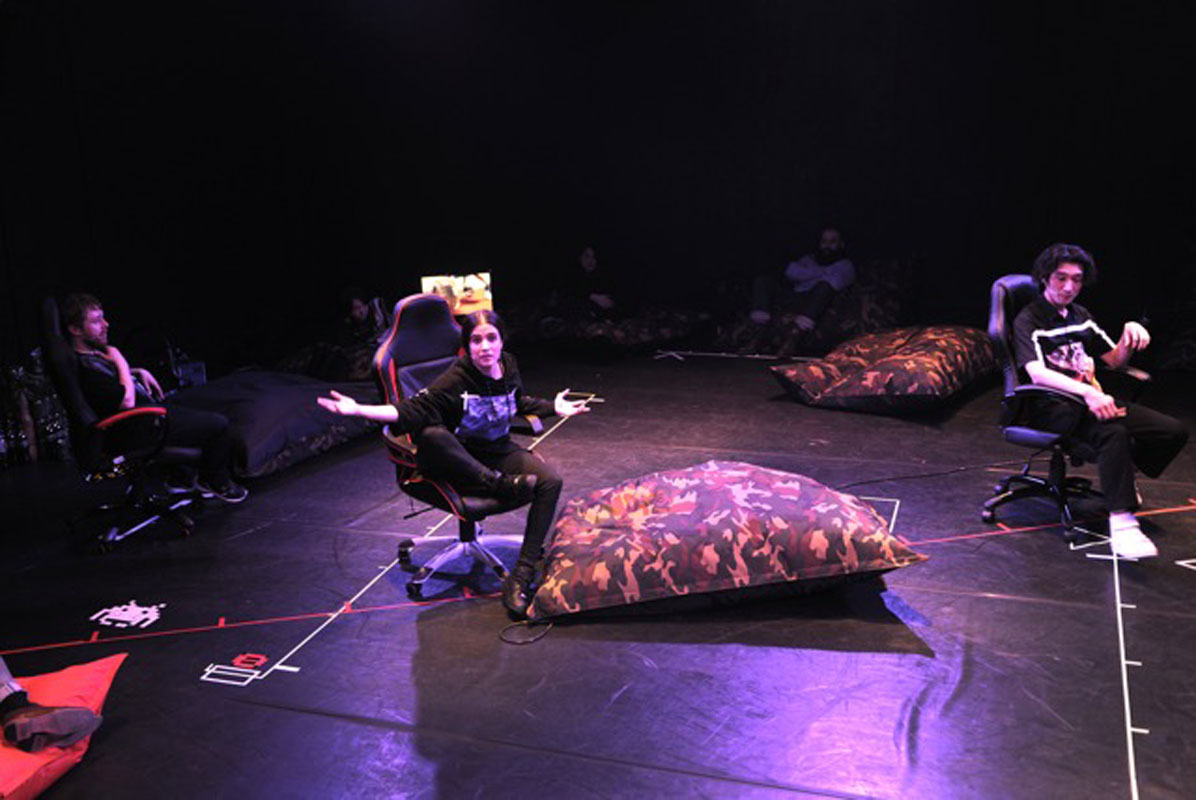 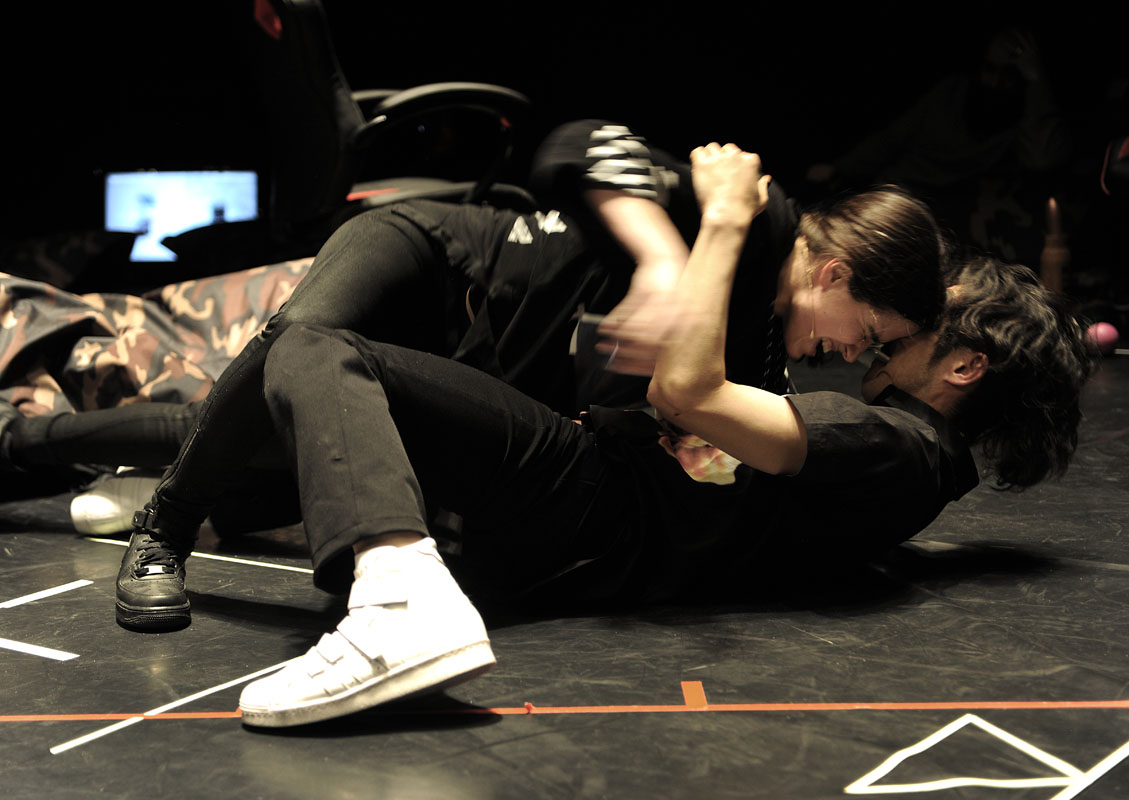 Three performers are giving an absurd one-hour crash course envisioning the future of warfare, while engaging the audience physically and slowly turning the

theatre into a theatre of war.

The Great Warmachine is challenging the ways we conceive of war and violence in relation to technology and economy.

ABOUT THE GREAT WARMACHINE

AITANA: I mean the next few wars – and really probably we are right in the middle of one – …

AITANA: …the next wars are really not going to be fought with armies and soldiers.

AITANA: I mean, that is really a nostalgic idea… the concept that we have nowadays of the soldier.

AITANA: What we need now is an expanded notion of what a combatant can be… like, already if you

in no time. Identity can be changed as quickly as gender can be feigned, to the extent that it doesn't make

much sense to hold on to these kinds of distinctions between soldier and civilian. It's like asking: What

kind of colour does a chameleon have? Which doesn't make much sense, right?

The theatre of The Great Warmachine seems to function as futuristic think tank; a playful, fashionable, sportive, relaxing and nourishing environment, created to optimize the thinking that needs to be done.

The audience is invited to sit down on beanbags on stage or in the audience seats, where they can watch the stream of video's on the five screens and share a 'green' coke, whilst listening to the three friendly smiling, yet ambiguous figures that engage each other and their listeners in a future vision of war.

Surfing on the current international discourse on technology, economy, society and culture, the performers bombard their

exchange for improved ideas; a theatre of progress rhetoric, completely saturated with war-motives.

Both attractive and repulsive.

As the performance continues, the temperature raises, the ideas start to spin and the audience gets more

and the minds of the spectators.

The music is directed and mixed live from one of the beanbags on a tablet. Inviting and familiar in the beginning and tripping trance-like techno towards the end, it offers a

constantly compelling, now and then shifting rhythm and sound, that sometimes aggressively disrupts the talking.

The lighting enhances this cool and sensational atmosphere, sometimes shutting down, or becoming just too bright.

The theatre; its words, sounds, lightning, set, physicality, becomes a discomforting theatre of war that the audience is inescapably drawn into.

In this way, The Great Warmachine demonstrates our reality as a vivid battleground.

in colaboration and performed by

Produced and supported by